The destruction of the complex of Transgas behind the National Museum in Prague is in full sway. The heat of June causes the dust of the (de)construction site to envelop the area with a cloudy halo. Sun rays project sharp shadows of the decreasing modernist buildings. Neighbouring walkways offer an almost theatrical viewpoint from where an occasional pedestrian can observe the spectacle of destruction from up close. Fragments of concrete and granite lie around together with a steel spiral staircase, no longer needed, resting on its side. Whatever the reading of the scene might be, this was the very suitable and ambivalent theatrical backdrop of the second Nonument Symposium, held in the Czech capital on 13th and 14th June 2019. 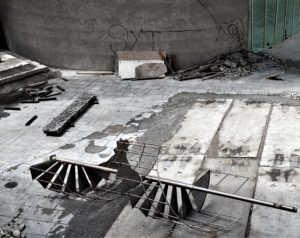 Disregard for and destruction of modernist architecture and public art is merely one of the spotlights of the Nonument Project which emerged from the intense and colourful international discussion. Physical destruction is not the only possible negation engrained within the concept of nonument. As theorist and architect Nika Grabar stressed in her opening contribution, memory can easily also takes the form of negation and nonuments might be those object that are remade so that they are not remembered. The Nonument Project has since its start a year and a half ago gathered a strong stress on heritage activism and preservation of the traces of the past in Europe and North American contexts. But it also opened less easily definable tasks lurking within the negation: moralism, public space activism, freedom and regulation, instrumentalisation, neo-colonialism, ideological revenge, artistic invention, reconceptuialisation, glamour and fetishization. Nonument is a neologism, and attempts to define neologisms are always in danger of being too broad or too narrow to remain meaningful. Even so, the danger must be addressed and overcome, because nonuments open up a vast and underdiscussed field in art and architecture: the importance of negation itself.

The way buildings and monuments fail is as telling as the way they succeed. Design and construction matter, obviously. As do the stories of architects, politicians, decision makers and builders that created them. But negation matters as well. It matters even more than an often rewritten story of triumphal construction. The failure and destruction are interesting because they rarely possess an official client or chronicler; they manifest the non-triumphal truths that would otherwise remain unspoken. Negation possesses a particular authenticity.

Nonuments contain in them traces of many different pasts but are predominantly the objects of today. Despite their origins in the conflicts and enlightenment projects of the 20th century, they seem to linger primarily because of what they mean and, even more, of what they ceased to mean here and now.

Rather than simply preserving the memory of the past, they help us to understand and amplify the existing spatial, political and social contradictions and conflicts. The linear relation between the programme, the process and the building/object breaks down in nonuments. The object comes first, created as much by the social tensions of today as it was by its designers and builders of yesterday. Counter-intuitively, the authors and the programme come after the object: they are its consequence, not the reason for its construction. 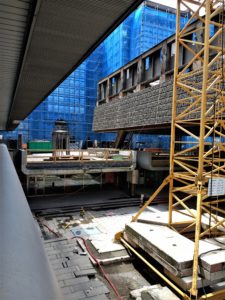 One of the central contradictions of the symposium can be traced to the trajectory of preservation. What should be protected and what restored depends on how we read the nonuments. Is the failure of today merely the result of spatial revanchist tendencies and the lack of maintenance? In that case, the only answer is an effective heritage strategy and depolitisation of architecture and art. On the other hand, insisting on such a position today seems hopelessly naïve. The preservation of failure or, broadly speaking, of all the stages of the history and the context of these objects seems at least as important as keeping alive the initial impetus for their construction. Dealing with monuments is not just simple preservation: it is an on-going recontextualisation: a construction more than maintenance, a fight against oblivion but also a fight against simple restoration to a fictitious and idealized pristine state. The involvement of contemporary art practices highlighted by the symposium seems crucial in these recontextualisations. As the artist Hans van Houwelingen stressed in his lecture, today may not only be the time for the monuments to honour something or somebody but also the time for the monuments to dishonour a person or an event. Nonuments manifest that both of these functions can be articulated and amplified by the same object.

Failure is not a simple negation: it is as ambivalent and as elusive as any affirmative act. What is more, we are not equipped yet to think failure: this is why instead of engaging with it, two ways of escaping the engagement can most often be observed today. The first is destruction: of you don’t know how to deal with whatever failed, tear the object down. This is what is happening to Transgas and to countless other monuments and building all across the World, conjuring an illusion that the building is the failure. Instead, of course, the real failure should be sought in the inability of the society to address growing inequality, erosion of public space, destruction of welfare state and progressive free-market fundamentalism. As so often in history, instead of engaging with these issues, it is much easier to locate a suitable scapegoat – preferably a silent and immobile one. But there is another, parallel strategy of escape from engagement with the burning issues of here and now: fetishization of decay and aestheticization of failure. It is manifested by the fact that failure has become a coveted photo or instagram opportunity and that the urban explorers have become the grand tourists of today.

Ruins have become consumable and, consequently, re-incorporated into the society as a tourist draw. In the process, the negation itself was negated, and with it the uncomfortable questions nonuments ceaselessly posed.

This is why negation matters and why engaging with failure is more important than ever. This is then the task of the Nonument project in an age where straightforward restoration is impossible: how to avoid both the destruction and the fetishization of nonuments, amplifying the fields of doubt, ambivalence and criticality created by negation.