Perhaps the best-known example of a well-functioning public housing complex in Vienna, the Wohnpark Alt-Erlaa includes 3180 apartments, each with a balcony or loggia. The multifunctional complex also comprises two health centres, two kindergartens, three schools, a day-care centre, a public library, a gym, six solariums, a mall, a church, bars, restaurants, playgrounds, an administration building and several leisure facilities and hobby rooms for more than 20 leisure clubs. There is a swimming pool on every rooftop and an indoor pool and sauna in every basement. Built on a vast area of 240 000 square metres the almost self-sufficient micro-town called Wohnpark Alt-Erlaa is home to about 11 000 residents. It may be considered a city within the city.

The concrete tower blocks A, B (two separate buildings) and C are up to 85 metres and 27 floors high. Planned as early as 1968, they were built in construction phases between 1973 and 1985 by the architect consortium Harry Glück, Kurt Hlaweniczka, Thomas Reinthaller and Franz Requat. The city-owned non-profit building company GESIBA (Gemeinnützige Siedlungs- und Bauaktiengesellschaft) has been the buildings’ owner and landlord ever since this gigantic council housing project was first built.

As an integrated complex the Wohnpark was built according to a holistic vision. Specifically, it was an adaptation of a well-known utilitarian happiness principle, implemented for architectural purposes and posited by the leading architect Harry Glück. The layout of the individual tower blocks and the public and green areas (around 140,000 square metres) are based on an ethical model of architectural design aimed at achieving the maximum good i.e. to provide the greatest amount of good for the greatest number of people. The principle was implemented with great success, with numerous studies proving high levels of resident satisfaction. Despite all its advantages, the Wohnpark Alt-Erlaa did not become an exemplary model for subsequent residential and urban development projects.

The iconic terraced tower blocks, with their strange yet beautiful futuristic appearance, may evoke feelings of nostalgia in the minds of contemporary viewers. Better still, the Wohnpark Alt-Erlaa is an extraordinary example of past visions of the future. A reminder of sci-fi-like self-contained housing and residential systems planned and executed in the recent past, it might even provide inspiration for projects to come, especially in the light of the global challenge of population growth.

Transcription
Yes, right away, I was probably the very first tenant, in the first block. So that would be roughly forty years ago, I reckon. And, what was it like, being built? We would always go and see how it was being built. It looked pretty wild, and you often wondered or heard from other people, who were saying, ‘No way, that’s going to be pricey, such a massive building, that’s never going to work’. But we’re satisfied. All three of my children live there too. They’re all grown up now and have a flat there, so we’re happy. – With the swimming pools, you don’t have to go god knows where and queue up when the weather’s hot. There’s the shopping centre. The fact you had everything nearby, and the schools. It was handy for the kids, too, that they had the school right there, at least the primary school. Apart from that, there are lots of clubs. I’m just back from my sports training. So there are plenty of leisure activities for you to do. And you don’t even have to leave the block!

Transcription
By chance, really, it was my wife who pushed for it. She absolutely wanted to move here, and it was really, really difficult to get a flat. There was a waiting list and all sorts of stuff, and it was all extremely expensive. I actually wanted... I would drive past every day and think: they must all be dwarfs in there because, from the street, it looks tiny. There’s no way I’m moving in there. But at some point, my wife must have been here, and now we’re both really, really satisfied! People get lost. I was worried there’d be masses of people milling about, but most of the time, when I take the lift, I’m on my own. – I know of countless new buildings and they’re all horrible, I’d never want to live there. It’s nothing like that here. Because you’ve got everything: an excellent infrastructure – apart from a university there’s everything here, and yes, even medical centres. I’ve got my GP right here in the building, four floors down with the lift. Twenty-three storeys up I’ve got the pool; I was in the pool today already, thinking it was going to be hell on earth up there. But there were just four people! I was on my own most of the time. Good transport links, especially now the underground comes out here, great connections. And since we’ve been living here, and especially since the Wall came down, lots of people from the East have come here, lots of students too, architecture students and so on, but people from Germany too, and France, and what have you. Some of them come to the front door and ask if they can have a look inside and how satisfied we are…

Transcription
Thank heavens there’s no grass growing on the terrace. I live right at the bottom, so we’ve got a large one... we’ve got a maisonette. So it’s us that’s above. Yes, we raised three children here, and now we’ve got the grandchildren. And I’ve got... two of my three children live here. One lives in the same entrance as we do, higher up, and one in Block C. You wouldn’t believe the quality of life! You see, you spend a lot less time elsewhere because you’ve got everything here. I think there’s something like 45 clubs. The building’s designed that way. And in the lower part – all the flats are on the outside, facing east or west – and in the lower part, you’ve got the clubrooms. They don’t have any windows, but rooms with three panels, always. A panel always consists of two flower planters side by side. So folk have taken the initiative and set up all these clubs. You can do all sorts of things, from jujitsu to political views, pottery and handicrafts, and dancing. It means people can go about their hobbies – whoosh – in their slippers. – He knew this plot of land was available. If he’d built lots of little houses on it, then all the greenery would be gone and, ok, people would have their little houses. But then that’s just urban sprawl, where everyone... So he decided to build upwards instead. The distance separating the individual blocks is as huge as the Stadtpark. That means that, if I’m standing out on my terrace and I see someone over there on their terrace in Block A, I can’t even tell if it’s a man or a woman, it’s so far away. And then you’ve always four sections, four flats side by side, and if you’re lucky – and we are lucky – you’ve got some nice neighbours. So overall, in the vast majority of cases, people here incredibly happy with the standard of living. I think Harry Glück did a great job. He created encounter zones, too, you know. We’ve got medical centres here, schools, nurseries – we’ve even got a church here. 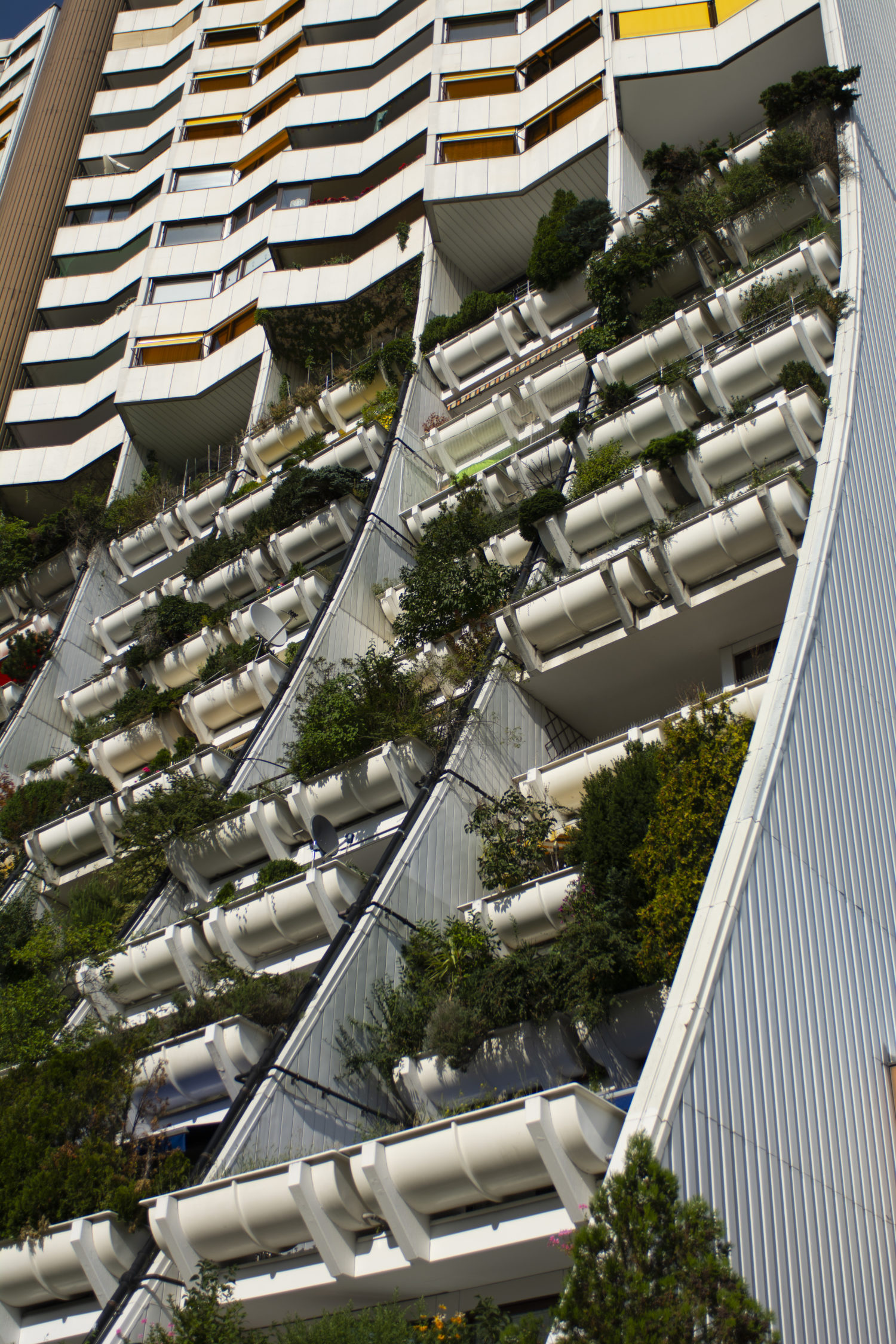 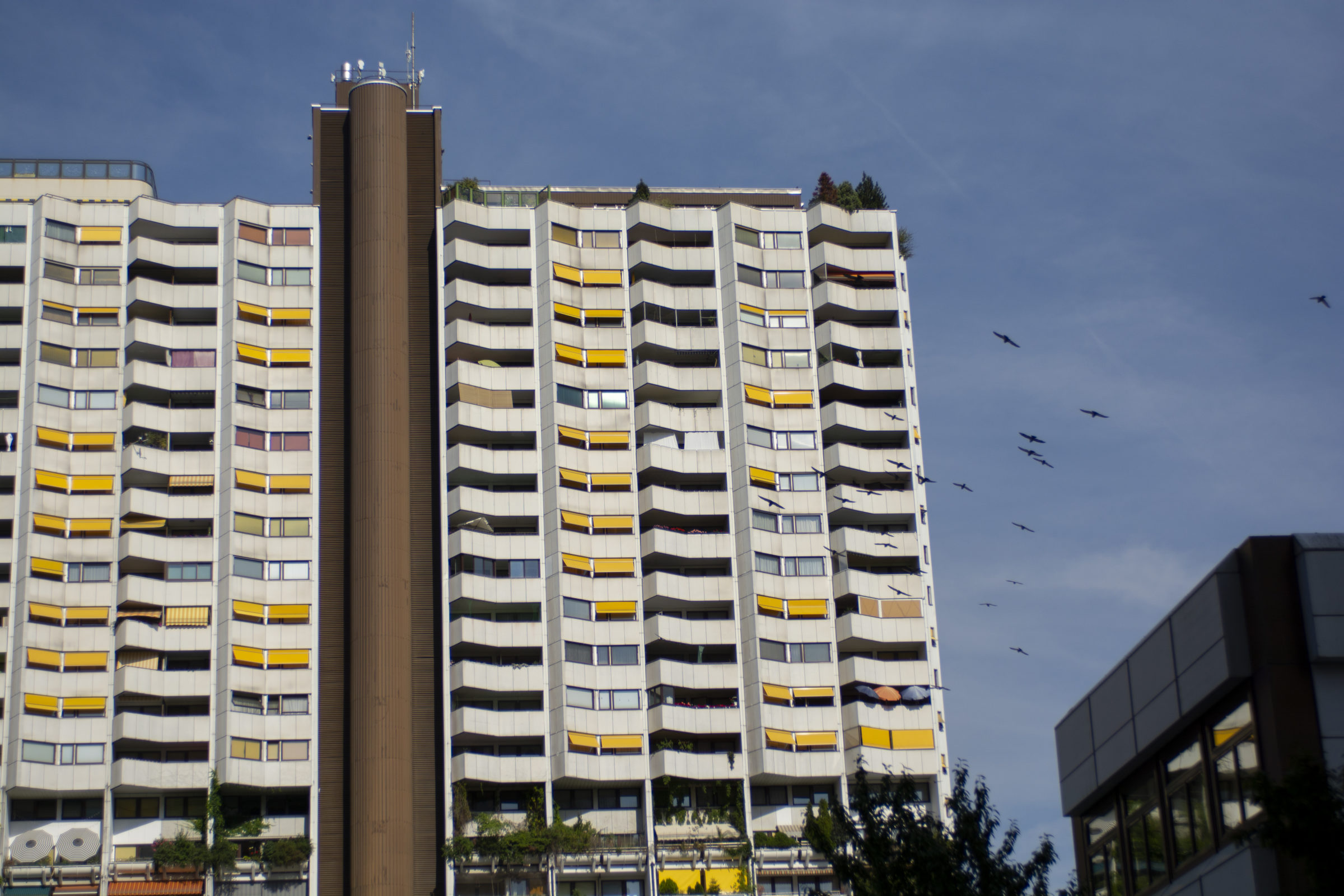 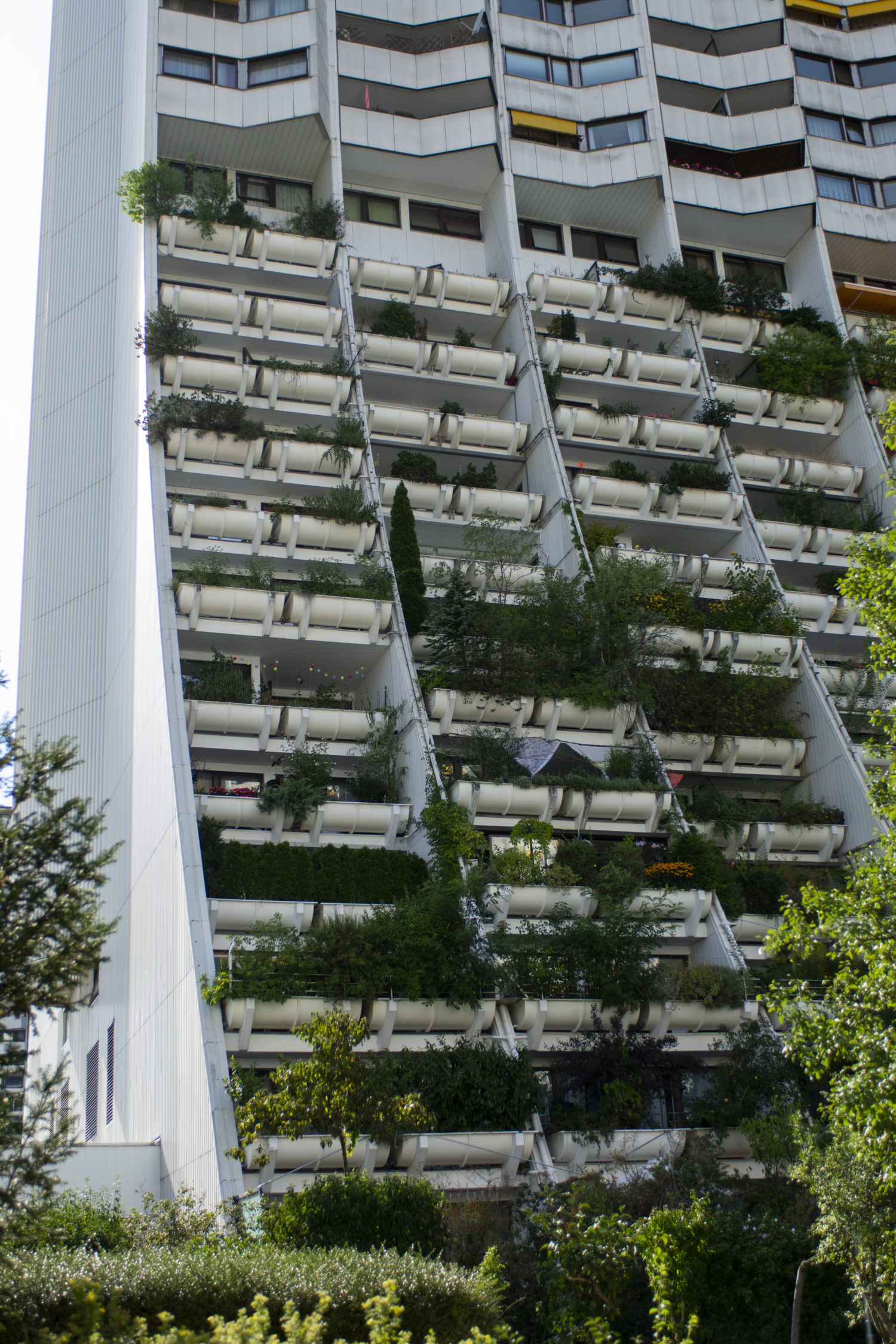 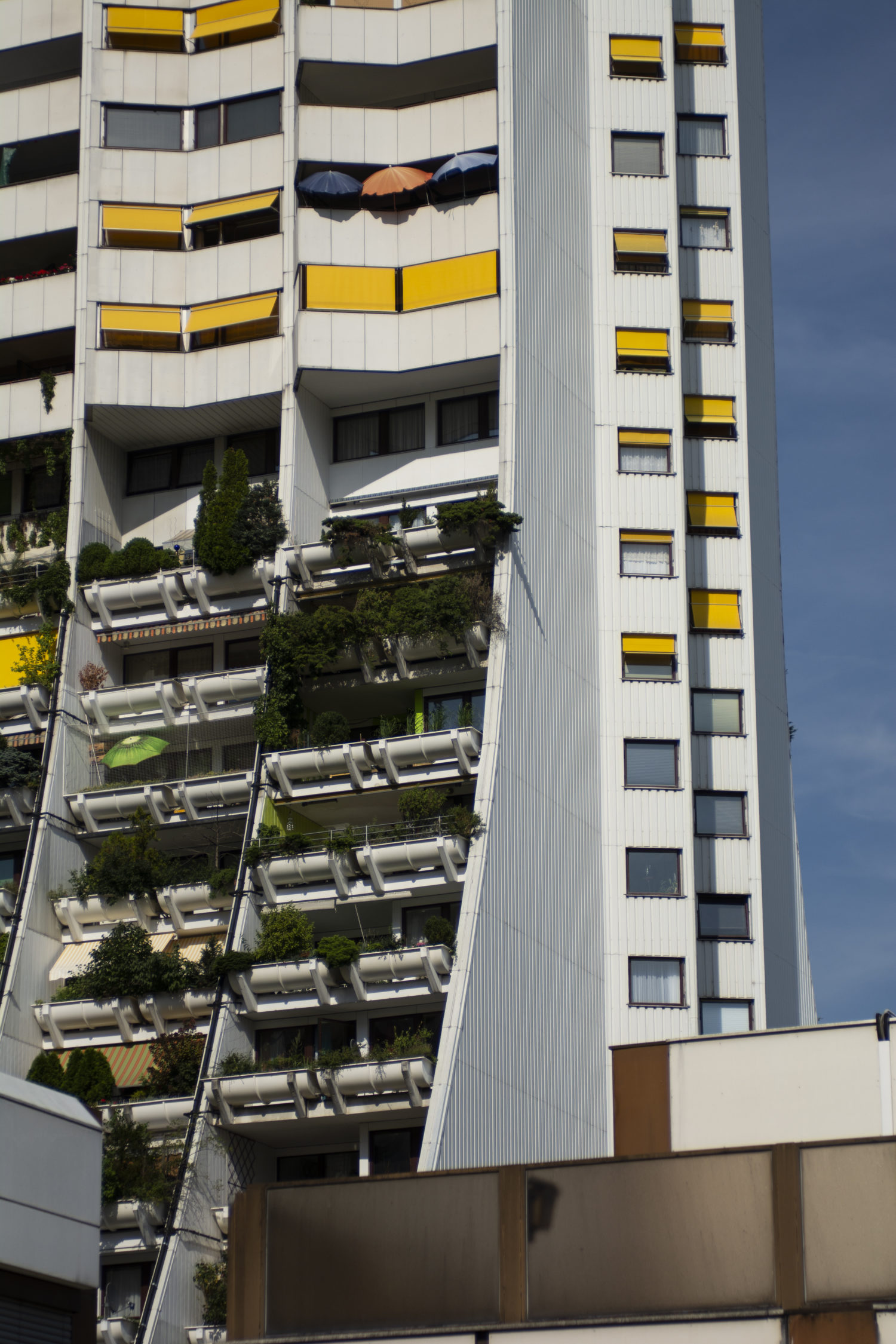