TSUM is one of the emblematic buildings in downtown Sofia. It is a nine-floor building, put up as part of a complex encompassing the neighbouring administrative building. When it was built, six of the floors offered goods for sale and three were used for administrative purposes. It has a majestic facade in early communist style. For a long time, it was the biggest trade centre in the Balkans and the first mall in Bulgaria. It was also the first building with escalators in the country.

TSUM has an interesting story related to its construction in the 1950s. The lead architect’s son had been killed by the Gestapo in Germany, in the 1940s. The lead architect, Kosta Nikolov, managed to get his son’s remains back and bury them properly, keeping a finger and several locks of hair as a keepsake. While the construction work was underway, the architect embedded a box with his son’s remains in the foundations. This was highly symbolic for, according to Bulgarian folklore, embedding a living person, or a living person’s shadow, in an edifice makes it stronger and more durable. This story was just an urban legend until the renovation in 2001 when workers actually found the buried remains. They decided to leave them there.

TSUM was emblematic of its time. It was heaven for the poor communist nation; a shopper could find everything there—from food, clothes and cosmetics to the newest makes of cars. People from all corners of the country rushed to see the splendid shop although, for most of them, it was mostly like an exhibition—hardly anyone could afford to buy the products on sale there.

After the renovation in 2001, the shop space was divided into smaller stores like those in contemporary malls. One of the big attractions of the building was an expensive restaurant on the ninth floor, where visitors could dine while taking in a bird’s-eye view of the whole city and enjoy the company of the restaurant’s pet—a real tiger in a cage.

During the next 15 years, the restaurant and most of the shops disappeared (the tiger was given to the Zoo). Then, when the era of malls and shopping centres started (they are more than 12 in Sofia now)—boasting big, flashy facades, nice locations and cinemas—the shop owners, naturally, preferred to move to where the customers were and the where the rentals were cheaper. The location of TSUM was good for private business offices so, floor by floor, they started to take it over. Presently, shops and restaurants occupy only two floors—half of them are empty. People go in just to use the free restrooms. Most people think that the management is intentionally kept poor and the prices high so that the building continues to be used only for money laundering purposes. The municipality wanted to buy the building and house a history museum in it, but the owner asked for the unrealistic sum of 35 million euros. (For comparison, he had bought it for only 10 million euros in 2004).

Nowadays, half of Sofia citizens don’t know what TSUM is, or used to be, at all; they have never been inside. Most of them look at the imposing building and wonder if it functions at all. Others look at the building with sadness and nostalgia for it bygone splendour and riches, wondering how the owners could have brought it to this state.

Art historian and researcher from Bulgaria

Transcription
My name is Aneliya Ivanova and I’m the researcher from Bulgaria for the MAPS project.

This will be a different kind of interview, a bit strange one, but I decided to make it because I have a lot of personal experience with the monument TSUM and I wanted to share them in an interesting way.
I’m 31 years old and I’m a Historian of art, but my contact with the monument was in a totally unrelated way. The monument is situated in downtown Sofia, and I live really close to it, but I’m originally from Plovdiv so I haven’t been in the monument while it was… while the building was full of shops, full of people, I’ve only heard stories for that period. While I lived there I passed by it often but if never made a big impression on me. It made bigger impression when me and my boyfriend started making the so-called Escape Rooms the TSUM building. At that time we already had one Room created in Sofia – a fun place, where you lock people in and they have to solve all the puzzles to manage to escape. Those Rooms were very popular, they still are, and ours was one of the good ones. We were contacted to create… actually when we were contacted we didn’t have the location yet but it turned out that the investor had rented a big area in TSUM where we created those Escape Rooms. Each Room was around 30-40 sq. meters big and we made four different Rooms with a nice spacious lobby. Usually, the Rooms are for adults but with the help of our employees, playing with the team, we adapted them for children 12-15 years old.
The first thing that impressed me in TSUM is how beautiful the building is. The building is totally amazing. I’m not sure if the decorations I liked so much, the wonderful stained glass on the ceiling, the giant crystal chandelier we part of the original building, or were added after the renovation. It made the building so beautiful, so splendid and at the same time… so empty. I noticed that there were only a few shops. For example on the first floor, when we moved in in 2017, there were only two restaurants and a clothes boutique and that more or less was everything on that floor. On the second floor, there were some shops – for souvenirs and other stuff, lingerie, Swiss knives … nothing that could bring a lot of visitors and it was very strange to me.
When we opened the Escape Room Center we started noticing how uncooperative the management of TSUM was. They were trying to drive us out, we had problems on every step of the way whatever we wanted to do. The whole TSUM was supposed to work until 10 PM because of us because before that it worked till 8 PM, but that didn’t mean that they had to leave the lights on… Basically they made everything possible to hinder the new tenants, that paid a very solid rent sum…
Our Escape Room Center lasted only two years there because they managed to drive us out. They decided to make a problem and that gave them the reason to drive us out. It was our investor’s fault for giving them a reason, but they used it very well, so that centre doesn’t exist anymore. But for its two years of work, I, as the manager of that centre, saw a lot of things.

The first thing was that all the tenants of the first floor moved out. People entered the building only for us or to use the toilets and… that was all. But on the other hand when customers called and asked where our centre was, and I told them “inside TSUM”, there we very impressed: “Oh, inside TSUM?”, inside this emblematic key building… Even colleagues and other people that heard that our Center was at TSUM were very impressed. The other thing that made a big impression on me and is left with me even now, but it makes me sad at the same time is, was when we had children’s birthdays and the kids were in the Rooms, the parents stayed outside in the lobby with me, and they usually talked. One of the most common topics of conversation for those parents that didn’t know each other very well was TSUM. Most of them started right away with “Have you been here lately?”, “Look what happened with TSUM!”, “Do you remember what it used to be?”, and that was every time I was there on a birthday, they were all wondering how did this happen, how is it possible for this building to be the same big shop their parents told them stories how big it was; how many people there were; that you could have found everything there; how when the new Volga car came out TSUM was the only place in Bulgaria you can see it on display… and how there is nothing there now, it’s empty. It was very strange to me, some people said I’ve never been here, I haven’t entered the building until now.” and several times people didn’t know where TSUM was and what TSUM was.

Last year we were these things picked up a little, in a very strange way. Part of the interior central corridor was sectioned and cut off. One of the entrances, that was ridiculous, but there was a lot of money and connections in play, one of the entrances was closed – the only one that was suitable for wheelchair entrance. They closed it and made a restaurant there so the entrance into TSUM became the entrance to the restaurant. After that at the other end of the floor, they moved the only shop that was on the floor, so that they can make several empty shops – 4-5 into one to make a big centre for clients of Sofiiska voda – that’s where people went to pay their bill for water, usually senior citizens. And now that is all there in on TSUM’s first floor. There was supposed to be a gym where our Rooms used to be, we had doubts that we were driven out for that gym’s sake, but it turned out that the noise of the gym was in the way, so it didn’t become a gym after all. It probably will become an office, as on the floors above, and it’s a matter of time the building to become an office building overall…

This is my personal experience with the TSUM monument. 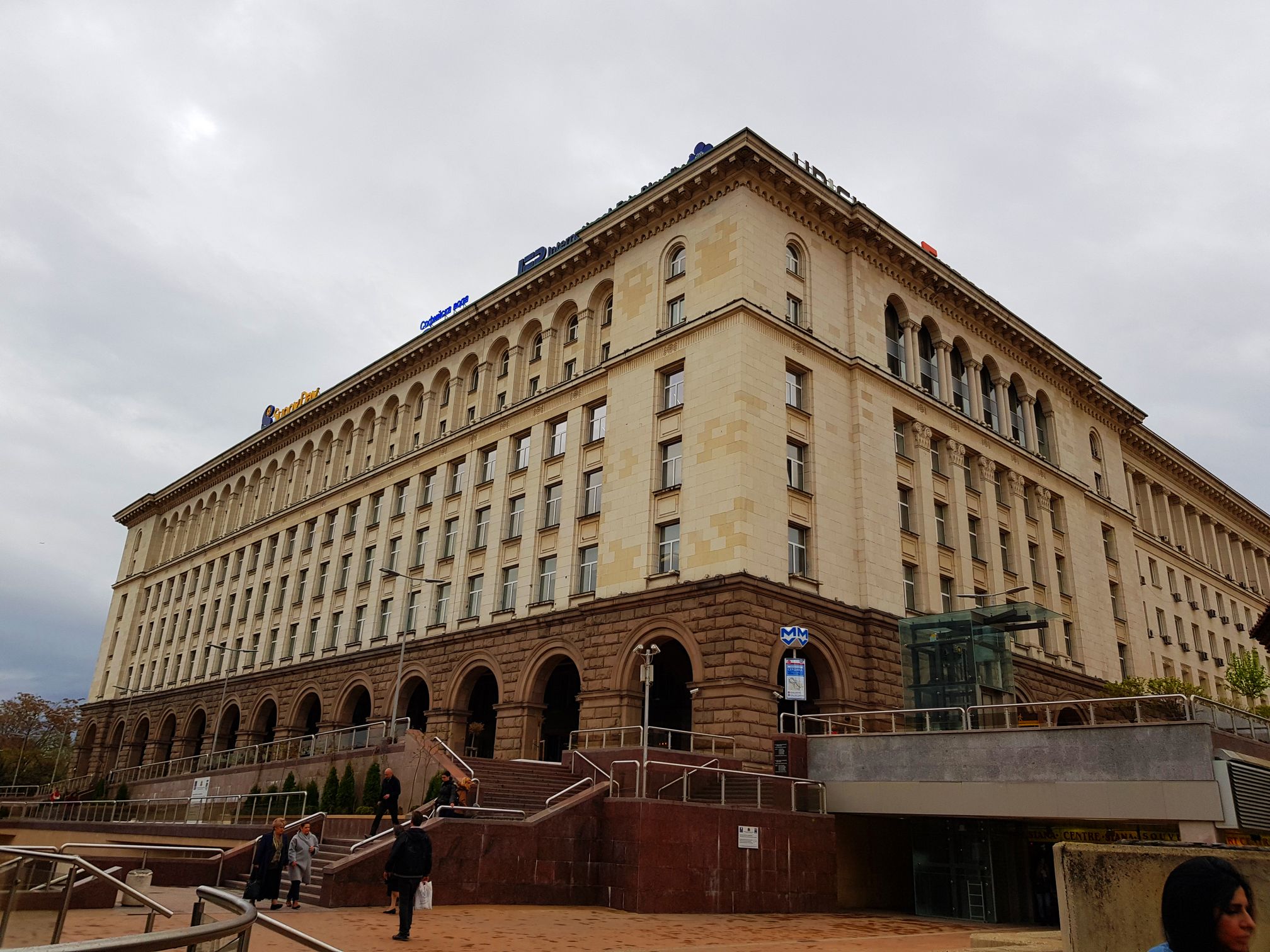 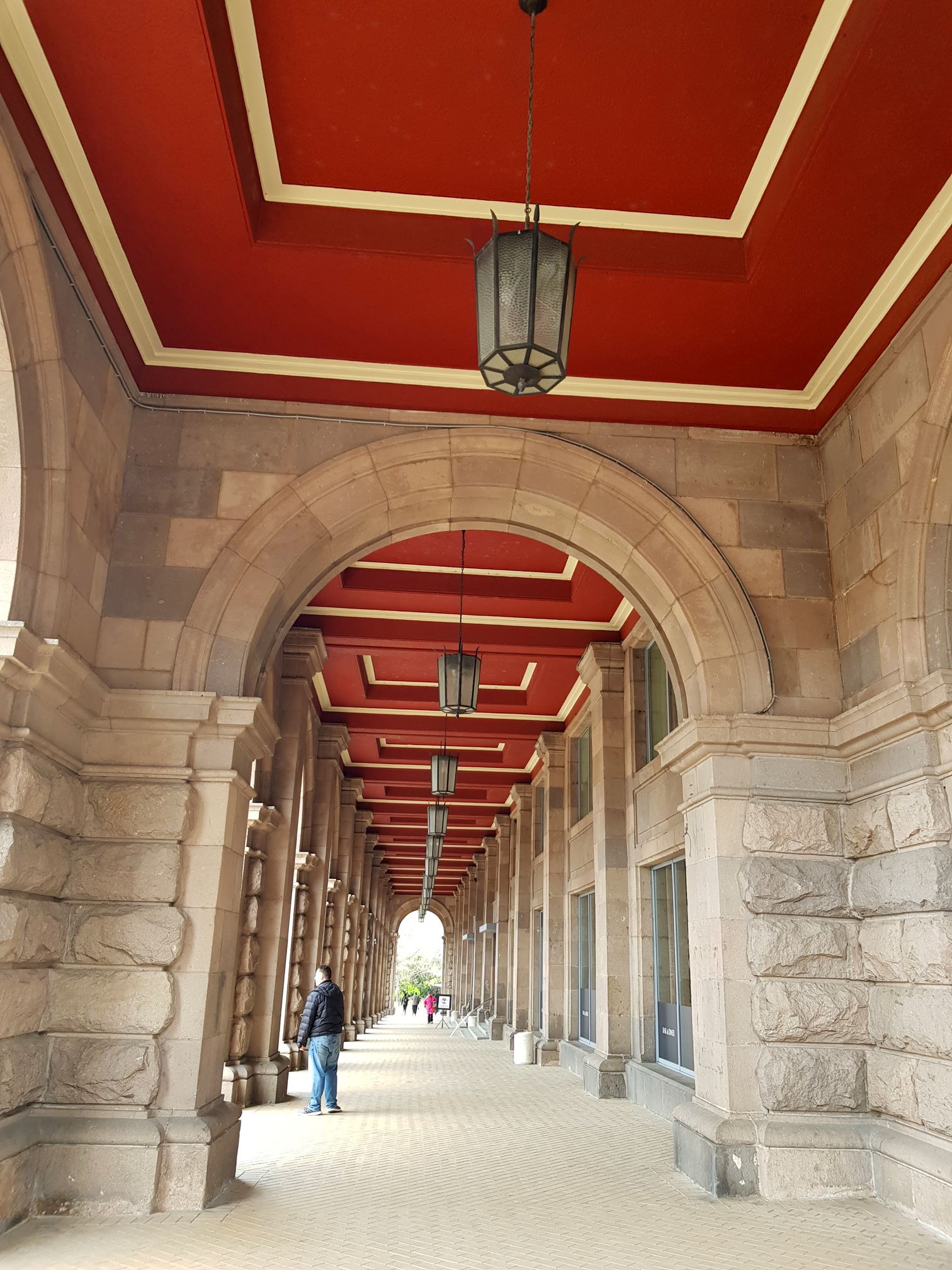 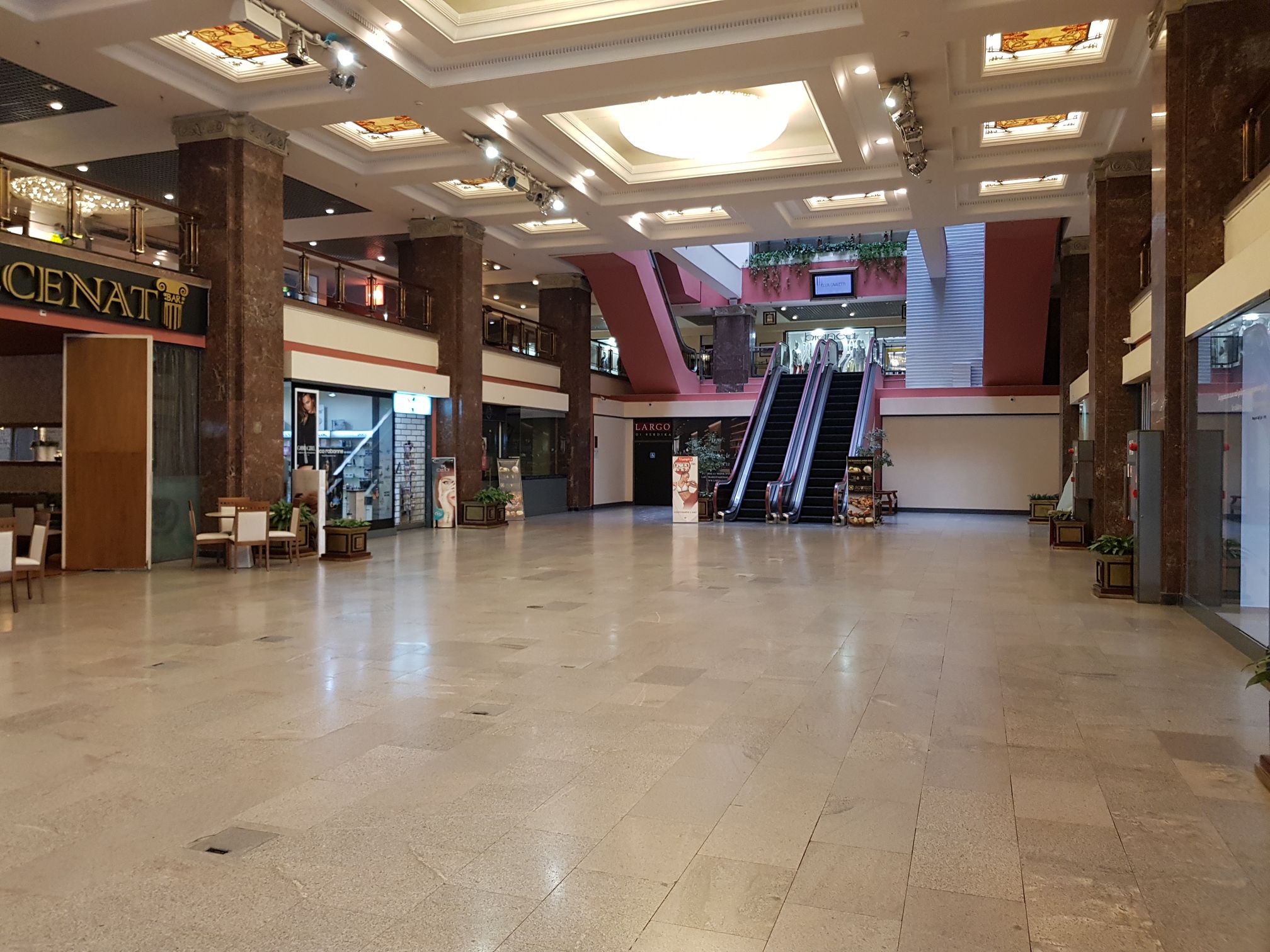 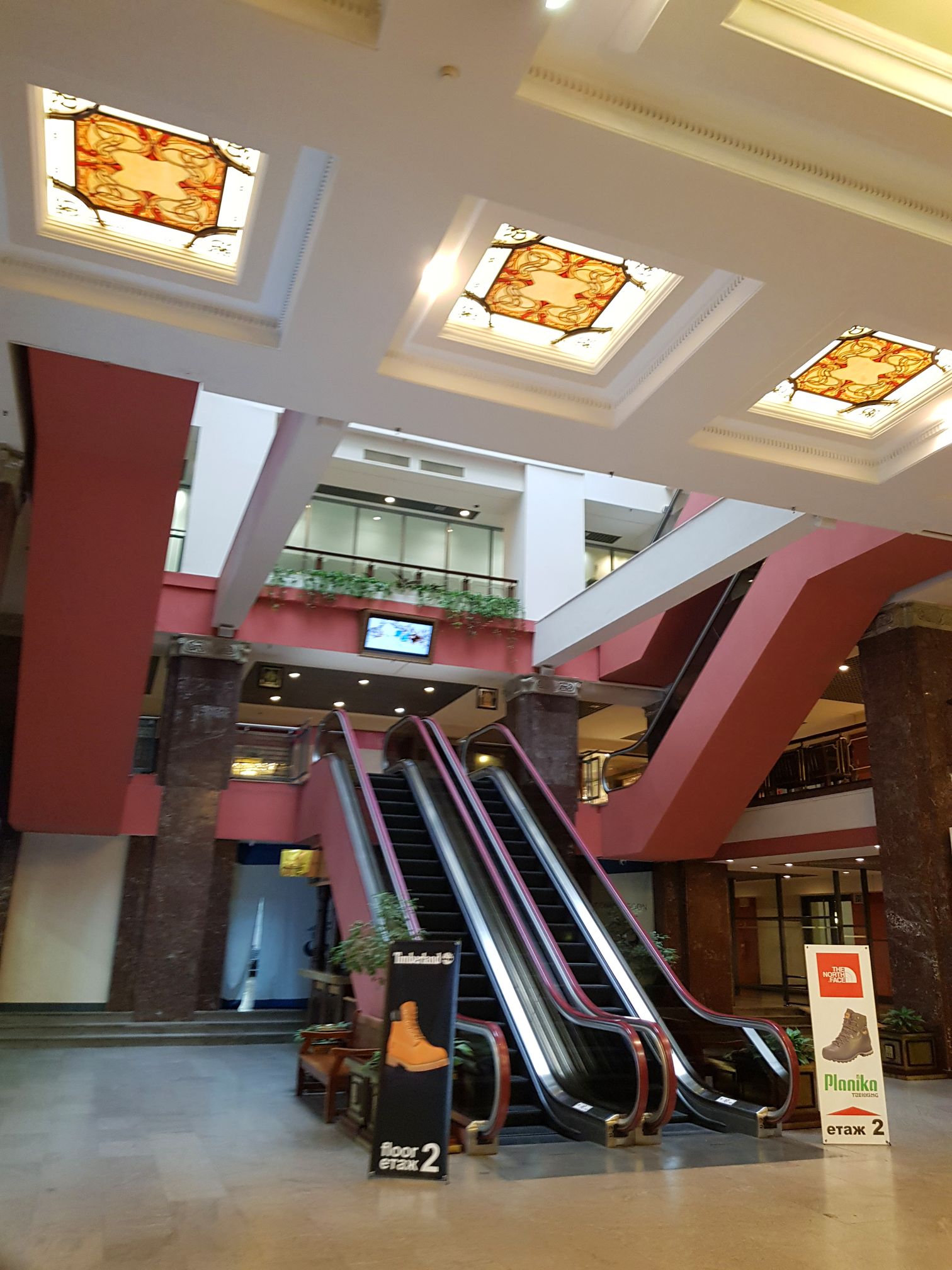 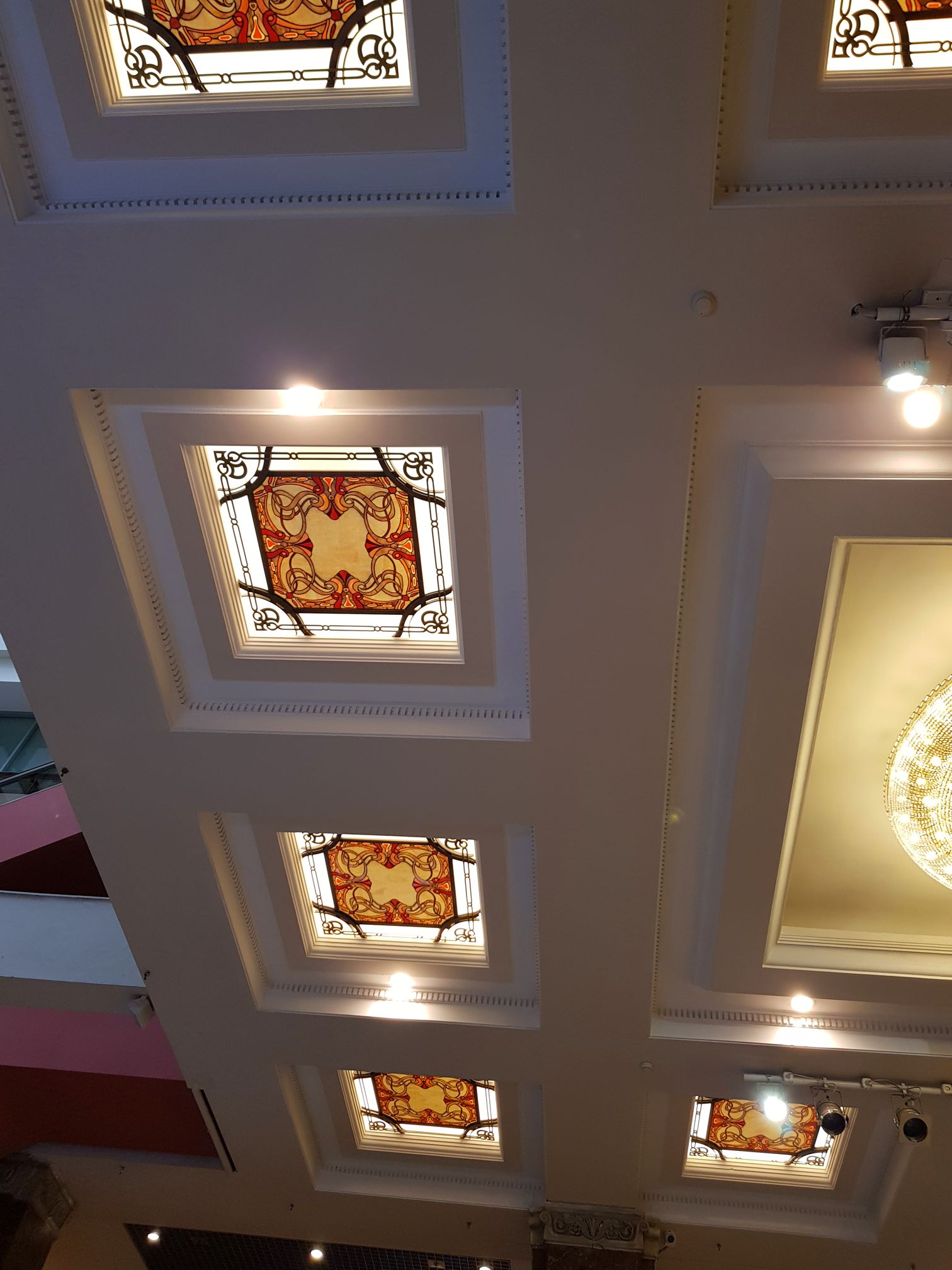