The picture of communist Stjepan Filipović raising his arms in resistance just before being hanged by Germans in May of 1942 became iconic in post-war Yugoslavia and travelled around the globe as a symbol of the fight against fascism. The huge metal monument commemorating the event was executed by one of country’s leading sculptors and instantly became a place of pilgrimage for school kids, workers’ excursions and a focal point for World War II commemorations of socialist times. Despite the local urban legend that sculptor Vojin Bakić made the monument in metal when his studio burnt down and he was forced to work in haste, the truth is that he had executed several monuments in this style—very progressive for the Yugoslav art scene at the time. Together with the monument, Valjevo also received a spacious public park on Vidrak Hill. After the fall of communism, there were calls to remove the monument, but none of these was taken seriously by the authorities. On the other hand, the monument lost its importance and is nowadays maintained just enough to prevent it from becoming a ruin. In recent years it has regained its status as one of the prime symbols of the town.

No longer the most important monument in town, it is well maintained as part of the park on Vidrak Hill. While the lower part is constantly covered with graffiti the rest of the metal structure is in good shape, as are all of the inscriptions in stone and metal around it. Despite all the attention it draws, the monument has never been listed as a heritage site.

VD: Katarina, to start off with, we’re talking about the monument to Stjepan Filipović in Valjevo, could you briefly sketch out what happened to the monument from the late 80s to today? How did it fare through those turbulent times?

KŽ: Yes, this monument is one of the most important and most famous monuments by Vojin Bakić, an artist who was an authentic representative of Yugoslav modernism, who is the main protagonists of the break with social realism and a proponent of abstraction. He was inspired to make this monument by a photograph taken by the Gestapo in 1942 when Stjepan Filipović was hanged. Stjepan Filipović, with the noose around his neck, raised his hands, fists clenched, calling on those gathered there not to be afraid and to take up arms against fascism. After the war, this photograph became world-famous and in 1949 Stjepan Filipović was awarded the status of People’s Hero. The monument was unveiled in 1960 by Edvard Kardelj and for the next three decades this memorial park was more than just a commemorative place but a place for learning, for friendship and a favoured excursion spot. Then things changed in the 90s. During the 90s the monument was threatened and there was even an initiative to blow it up, practically in the same way that monuments to the People’s Liberation Struggle were blown up in Croatia, where several thousand monuments in public spaces were destroyed. Many monuments by Vojin Bakić were destroyed so that this monument in Valjevo is one of the few to have survived and the monument to Stjepan Filipović in his hometown of Opuzen has been destroyed. It seemed that if the monument survived the 90s that there wouldn’t be any larger upheavals. Of course, the interest of the government was greater for some other kinds of monuments. The Stjepan Filipović monument wasn’t then and isn’t now a key tourist attraction or a key monument that appears on postcards or in tourism brochures. That’s actually changing now but this is to be expected because monuments do hold up a mirror to the society they come from so it comes as no surprise that things are changing. What’s interesting is that the monument wasn’t destroyed but interest in the monument went completely in the other direction: it isn’t a symbol of the People’s Liberation Struggle or a symbol of the fight against fascism. In fact, different stories are being woven: Was it inspired by the People’s Hero called Stjepan Filipović or Stevan Filipović, was he a Serb or a Croat and, ultimately, if it was Stjepan Filipović, why is the elementary school in Valjevo named after “Stevan Filipović”.

Transcription
Little stars above Valjevo stood,
They stood and shone,
Wondrously they looked about,
At Valjevo’s buildings and mills,
And thought to themselves,
Are you the sun or white rocks,
Or are you a tower that stands tall,
And from Valjevo a voice was heard,
The brigade through Valjevo marched.
“Dear stars, why do you wonder,
Don’t you see the monument?
The bright white monument,
That’s the hero Steva Filipović.”
He stands here night after night,
Waiting for an honest citizen of Serbia to come along.

Transcription
VD: Željko, sketch out for me how much you know from what you remember and from what, let’s say, older people told you about the monument to Stjepan Filipović and what kind of state it was in, say, the 80s, what it was like in the worst anti-communist times in the 90s and how it looked during the last fifteen years or so. Have there been any changes?

ŽP: Well generally there have been a lot of changes. Actually, what I heard from the older generation and from my parents and those a bit older than them, when they mention those school outings that were both for fun and educational. Almost all those outings came by Valjevo and the kids never had a bit of free time to run about and take pictures and so on. Well now, I remember that time, I was maybe 4 or 5 when I remember coming to the monument for the first time. And when I was 4 or 5 those were the unfortunate 90s. Back then that place was for us… Of course, nobody knew who it was or what that place meant or didn’t mean in history. However, for us it was a place for a day out because when you’re little you think that the world is much bigger than you and so of course for us, it was like going on a day trip practically out of town, even though I live fifteen minutes walk from there. But for us, it was always like some kind of excursion where we would take a frisbee and a ball and hang out with our parents, maybe sit in the shade or go get a drink at the Pavilion, a restaurant that was nearby. Well now, that’s how I remember it as a child. Now I drop by the monument or walk past and I stop and have a look at what state it’s in. I think that now families go up there and walk about when the weather’s nice because it’s still nice and green but I don’t think it’s the same as it was in the 80s.

VD: There are definitely no school outings?

ŽP: School excursions might stop along the road to the Ćelije Monastery or on towards Lelić or if someone really wants to see it but I think that generally even outings that spend half a day in Valjevo don’t visit that place.

VD: Even so, do you think that things are now a bit better than in the 90s?

ŽP: I think so. First of all, in the 90s I think I saw graffiti without any meaning, just people’s tags… I think most of that has been cleaned away in the meantime. Sure graffiti can appear again… I think graffiti mostly appears because of people’s ignorance. Not because of intolerance or disrespect towards cultural and historical heritage but simply because those who draw graffiti are, in my opinion, adolescents of around 15 years of age who save up for a spray can and that’s a hidden place where they can sign their name.

VD: But in a way, it isn’t hidden because everyone will see it sooner or later?

ŽP: That’s right, yes, and then that’s why it happens. However, I think that the general state it’s in is pretty satisfactory except if it was up to me I’d do that place up even better and it would look even nicer. 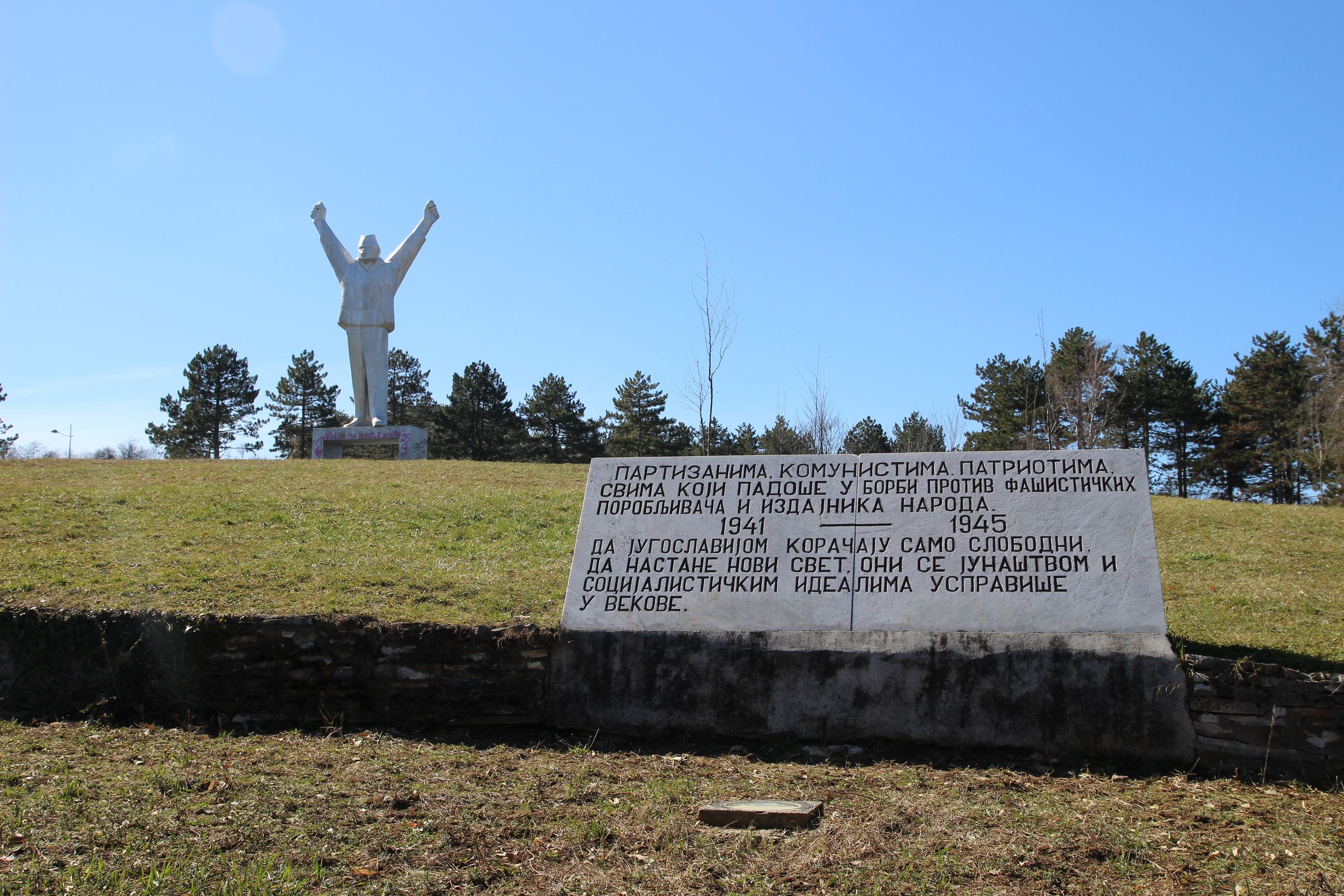 Standing beneath the gallows where he will be hanged momentarily, Stjepan Filipović / Photo: Slobodanka Vasić, United States Holocaust Memorial Museum