This is the first big monument the communists built in Bulgaria. Right after 1944, they needed to construct big, but quickly-made installations for parades and as decoration. They were made of plaster or wood and fabric. The communists tried to mark their territory with them, to show that they are there and are in charge. Shortly after that, they decided to make the propaganda lasting by means of imposing monuments that would stay on for future generations.

An interesting fact about the monument is that before it was constructed in stone and bronze, the authors created a 1:1 ratio plaster model of the monument and placed it on-site in order to see how it would look: it was the first monument of this kind and this scale in Bulgaria, so they weren’t sure and wanted to try it out in a non-durable material first.

The monument is situated in a park in central Sofia. It has one large, tall pedestal, on top of which there are three bronze figures: a Russian soldier, a worker and a peasant woman holding a child. A big terrace surrounds the pedestal on which official gatherings used to be held. The terrace has staircases on its east, and main, side while on the other three sides it has bronze high reliefs depicting epic moments of the Soviet battles. Close to the main composition, there are two bronze groupings of standing people, depicting the hearty reception of the Russian soldiers in Bulgaria.

The monument is typical of the Early-Stalinist style, depicting realistic figures, telltale compositions and centralised composition. That was what was needed for the people to understand the idea of the monument. In later years, this kind of portrayal of figures and compositions disappears completely.

The monument is among the most publicly disliked in Sofia. It was supposed to be destroyed soon after 1989, the order was given, and the machines went to knock it down. But the Russian Embassy interceded, saying that this monument wasn’t dedicated to the USSR armies, but to the armies that helped to free Bulgaria from the Turkish yoke (1898). There are still groups of people and organisations trying to have the monument demolished, destroyed or moved somewhere else.

Another interesting fact is that one of the side bronze compositions was painted over by anonymous (probably different each time) art groups on several occasions. The first time it was painted in pink. The second time the soldiers were spray-painted into a popular comic book and other contemporary, capitalist characters (Santa Claus, Ronald McDonald, Superman, The Mask, etc.). There was also an inscription: “In step with the Times”. This prompted a lot of discussions, and later, the artists who claimed they did it were awarded a prize by the House of Humour and Satire, Gabrovo. The third time the monument was painted in the colours of the Ukrainian flag, in reference to the recent problems between Russia and Ukraine.

1954Monument to the friendship between Bulgaria and USSR

2018 Still standing in the centre of the city, but hated 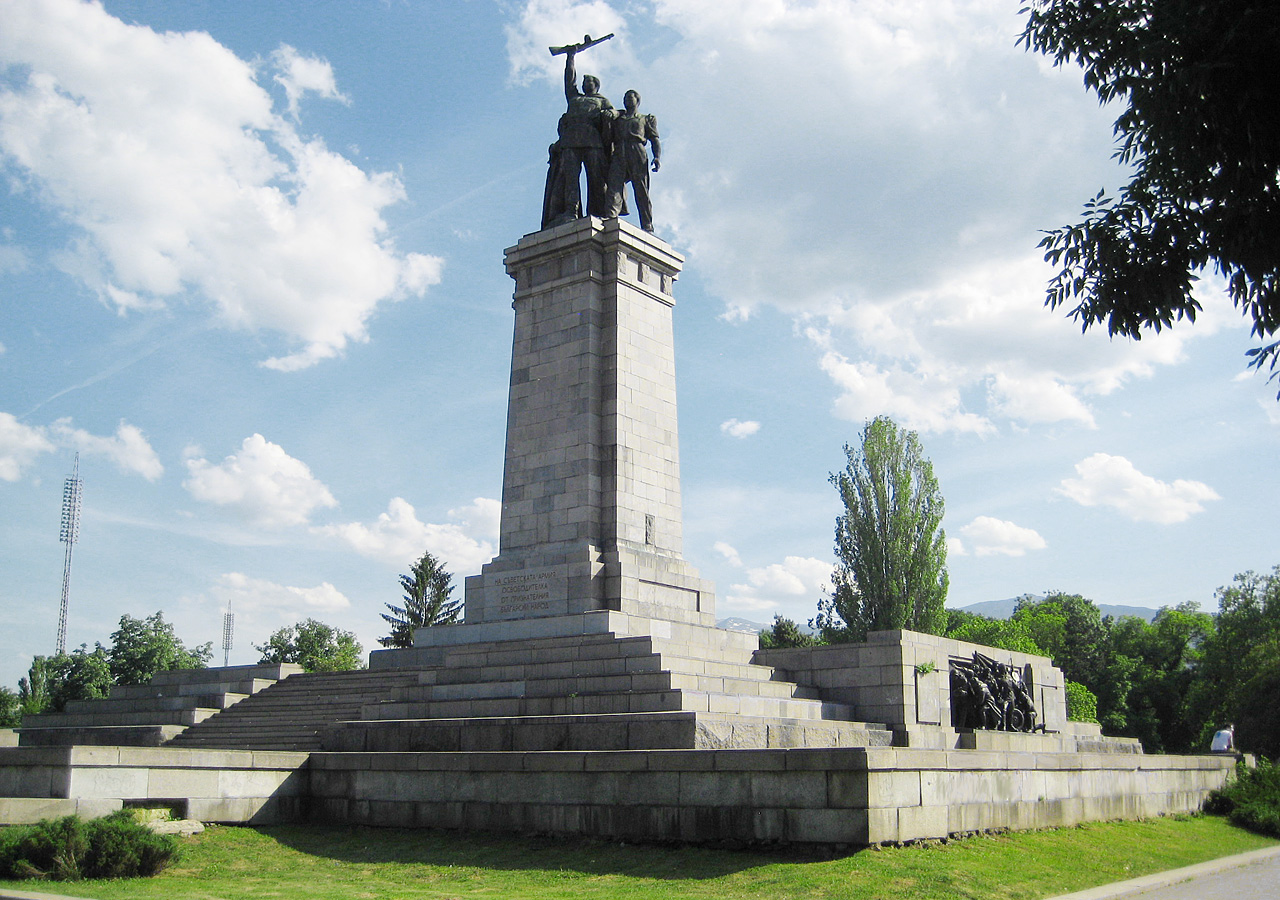 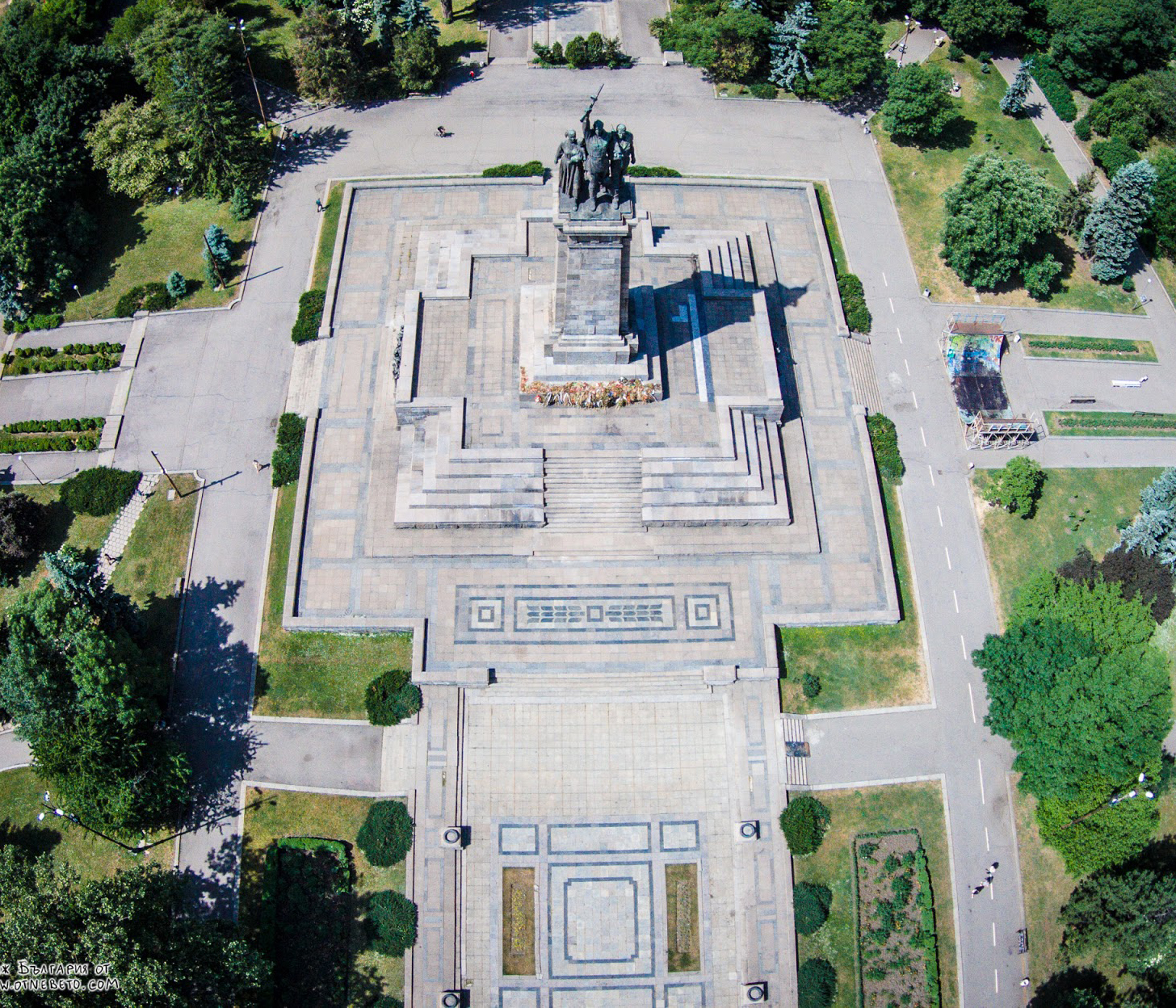 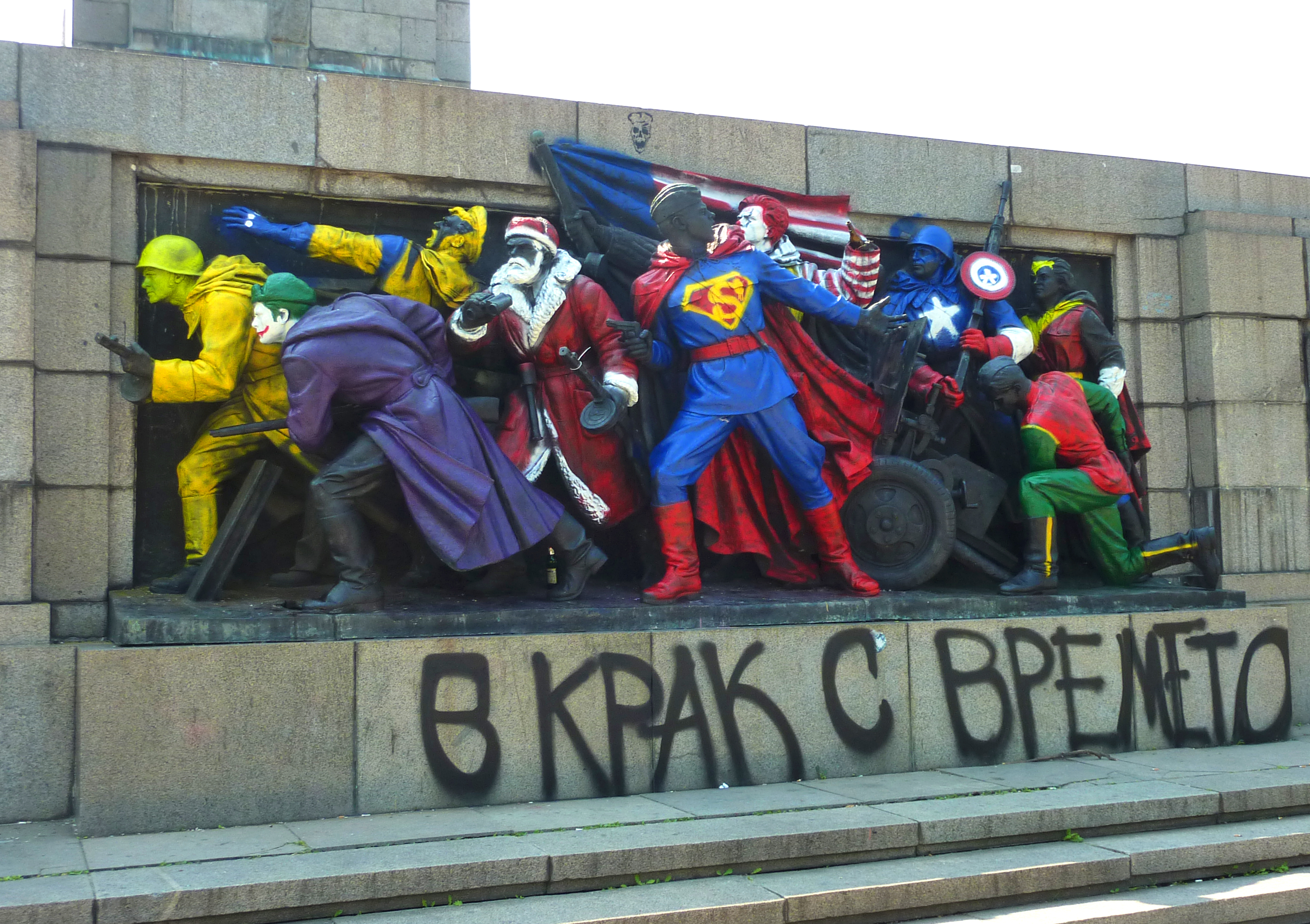