From Nowhere to Noplace was a performative sound walk action that took place in Ljubljana at the site of the former Pioneer Railroad. On 25 May 2019, this artistic intervention revived the children's railway that almost completely disappeared from the city and public memory.

Nonument Group’s intervention titled From Nowhere to Noplace, Pioneer Railway, at the site of Ljubljana’s former Pioneer Railway took place on the 25 May 2019, on the former Tito’s Day of Youth. The intervention joined multidisciplinary research with elements of performance, narration, visual and sound elements. It addressed themes of memory and erasure in relation to infrastructure and ideology and was realised as a performative light and sound walk during the night on the ghostly former tracks of the Pioneer Railway. 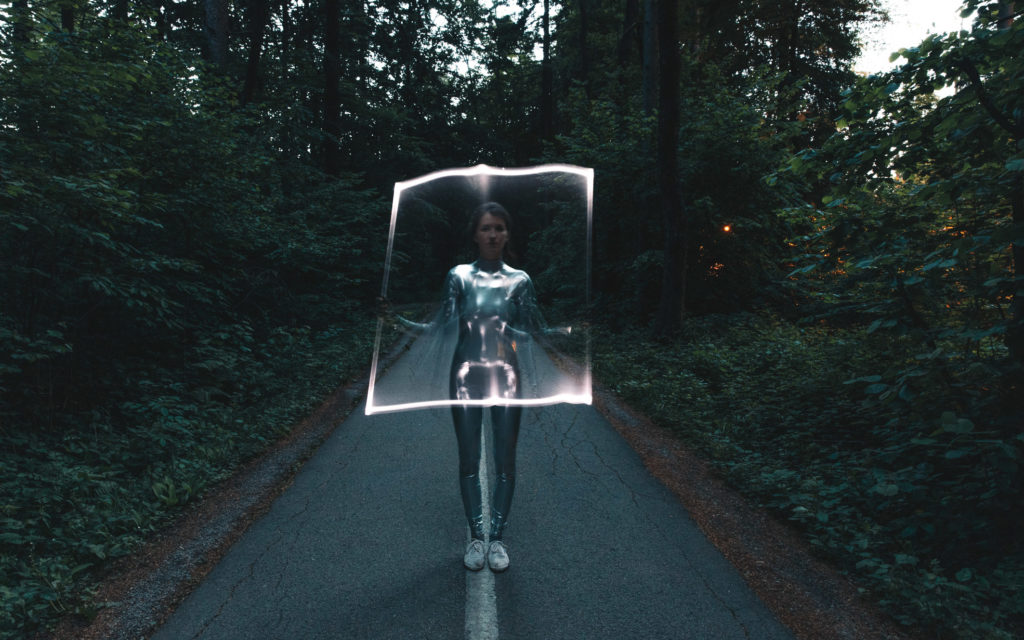 From Nowhere to Noplace was a performative sound walk in which walkers were invited to take a collective guided walk, while listening to the sound essay that merges documentary sounds, excerpts of interviews with former pioneers and experts, and a narrated soundscape. Three performers – futuristic pioneers that guided the tour performed symbolic choreographies to mark the decisive points in the railway’s life: VISION / OPENING / WORK / DECLINE. Each chapter had a different light-scape atmosphere. The procession concluded with the burning of four words: FUTURE, BODOČNOST, NOWHERE, NO PLACE.

The idea for children’s railways, or pioneer railways as they were called at the time, originated in the USSR and spread quickly over the Eastern Bloc, from China to Cuba. Children’s railways are fully operational smaller-scale railways that “have a track gauge of at least 600 mm and can carry full size narrow gauge rolling stock.” They are a peculiar kind of extracurricular institutions: children perform all the jobs, except for the train driving, under the supervision of adult railway workers.

Although most children’s railways closed down after the collapse of the Soviet Union, some of them never ceased to operate. The Budapest children’s railway (opened in 1948) is still very popular today and was only closed for a short period of time after the Hungarian Revolution of 1956 in all its 50 years of existence.

Yugoslavia also embraced the idea of pioneer railways. After those in Belgrade and Zagreb, a third pioneer railway was opened in Ljubljana in 1948. Built by work brigades during the course of a single week in March 1948, the railway connected the city areas of Rožna dolina, Koseze and Podutik.

Initially, Ljubljana’s Pioneer Railway was very popular, but the public quickly lost interest, so it was finally closed down in 1954. While the rail tracks were removed almost immediately, some of the train stations along the line were standing for many years after the railway ceased to operate, but were mostly left to decay or were repurposed and renovated.

Nevertheless, one can still find some remains along the former children’s railway line. Part of the line is now a bicycle lane connecting Rožna dolina and Koseze, and an eager observer can spot some of the remaining marker stones along the way.

Go to this Nonument